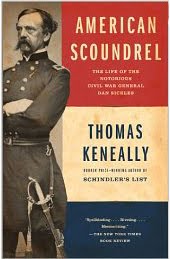 My ‘Books to Read’ list is entirely too long. I have stacks and stacks of books I WANT to read but have currently surrendered to the life of museum textbooks and articles, WHICH I LOVE! I have been randomly trying to fit in bits of reading about ‘other stuff’ when possible. If nothing else to finish the 3-4 books I was in the middle of from this summer. In the summer of 2008 I took a haunted walking tour through Washington D.C. Most of this tour was spent out front of the white house and one particular story struck my fancy; that of Dan Sickles whose ghost is said to be lurking around the square. The interpreter recommended the book American Scoundrel: The Life of the Notorious Civil War General Dan Sickles by Thomas Keneally (you know him because he also wrote Schindler’s List).

Dan Sickles was by classical definition a scoundrel, a hero, adulterer, bon vivant, murderer and rogue. He was also a lawyer, businessman, politician and Civil War hero. With such an exciting life why might Dan care to stalk Lafayette Park in death? The most significant exploit of Dan’s life was staged there one fateful afternoon. On that day Dan, though a seducer of many women, murdered Philip Barton Key (son of Francis Scott Key who wrote The Star-Spangled Banner) in cold blood for having an affair with Dan’s neglected wife, Teresa.

Without sharing the entire book there are a few more fun facts you may not know about Dan Sickles. He was a best friend to President Lincoln and perhaps an even closer one to his wife, Mary Todd. Dan was also one of the original movers and shakers to the development of Central Park in New York City. 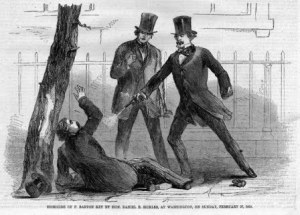 I definitely recommend this book to anybody who enjoys nonfiction. There is a bit of a slow piece in the middle where Keneally takes you through every meticulous detail of the court hearing but it is worth it to get to the exciting Civil War narration. This book gives an excellent illustration of the often unscrupulous life of the middle 1800’s.

This entry was posted on Tuesday, September 14th, 2010 at 4:03 am and posted in Reviews (Books, Movies, Etc.). You can follow any responses to this entry through the RSS 2.0 feed.
« Contextualization: The Museum Effect
Gustav Stickley and the Arts and Craft Movement »