#Iowaventure, but what does it all mean?

So, I started this thing I like to call

That is, sporadic Iowa adventures to wherever discovering whatever I/we can find. Occasionally I do this by myself, but usually Marco is there as my partner in crime. Once in a while we explore other states and have thing like Illiventures. I’ve been meaning to blog these all along so we might get a little out of order as I catch up on old adventures while having new ones! We’ve had many trips prior to this point, but this post is about the first trip I really considered an Iowaventure experience.

On a work trip to Omaha, Marco spotted a sign for the Iowa Aviation Museum in Greenfield, IA and (knowing me) recommended it for a day trip. We did a little research beforehand to see open times and what else is in the area. I ALWAYS recommend this when going to hidden, out of the way places; they are closed too often to leave being there at the right time up to chance. Given our obsession for golf we can find a course just about anywhere and built this in to our trip. Early(ish) in the morning we headed towards the Greenfield Country Club so that we could fit in 18 holes and still have time left in our day. We assumed because this is a country club that it would be a private course, but decided to call anyways. For the record, the course is PRIVATE, but if you pay the greens fees you can play there… so… it’s not private?

On our way there we randomly spotted something that I think has been the entire inspiration for our adventures since. Driving along we see a man painting an enormous rock on the side of the road and decide to turn around, pull in (only kind of creepily), and ask the guy what he’s all about. Turns out we’ve found Ray “Bubba” Sorensen who paints Freedom Rocks. Inspired by the movie Saving Private Ryan, Ray began painting a new “thank you” to our veterans each year. We chatted with him for several minutes and enjoyed his artwork. Part of the mural was created using paint that has the cremated ash of veterans mixed in.

Alas, we arrived at the Greenfield Country Club to find some really beautiful scenery for our golf game.

Meals are always a very important thing to me on road trips. I absolutely HATE traveling to/in new places and eating at restaurants I could find anywhere ( no McDonald’s or BK for me). I always try to look up or ask for local suggestions and have found many an amazing place this way, also, some not so delicious. We had a couple of options on the horizon as we headed into Greenfield proper, population 2,000. Unfortunately, Greenfield turns into apocalypse town during the afternoon with everything closed and nobody in sight, so,  we were left with the  bowling alley, approx.3 lanes wide, to find our fare.  The food was as you’d expect, but the people watching was great. I love sitting in small local joints and seeing the familiarity between people and servers, and overhearing the conversation.

From here, to our actual destination, the Iowa Aviation Museum. I was pleasantly surprised by this little find. I recommend it as a stop to anybody traveling along 80. The museum houses several unique aircraft, an Iowa Aviation Hall of Fame (full of VERY interesting stories), and an exhibition area. I know nothing about airplanes, and didn’t think I was interested in them, but we spent a substantial amount of time here. 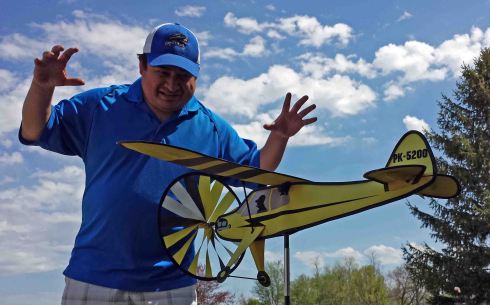 At this point, our intention was to head home because we had plans to attend an Iowa Cubs game in the evening and we had to let little pupperkins out.

That’s right, within minutes of leaving the museum hail came down upon us. Naturally we turned around and headed south to figure something else out. We are so very glad we did because from there our adventure continued. As we were driving we saw a sign to Roseman Bridge, one of the Bridges of Madison County. Having been to one during the Covered Bridges Festival last year, we decided to hunt for it.

While driving we saw the most amazing white barn owl sitting on a barbed fence against the backdrop of a dead tree and the gloomy sky. I yelled at Marco to stop so I could take a photo but while reversing the owl flew away. You can imagine what it was like with the photo below though. 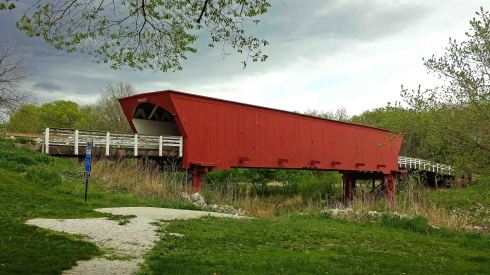 After the bridge, we continued our detour and once again found a sign, this time to my very own state park.

Turns out at PAMmel State Park you can ford a river! There were no signs offering us suggestions, but we assumed the following A) Caulk the Nissan Sentra and float it, B) Find an Indian Guide to help us cross the river , or C) Ford the river now. We were fresh out of caulk and there were no guides to be found. I tested the waters by walking it first and deemed it safe, Marco chose to stay back with the children and oxen. We forded the river!

Because of time constraints we didn’t get to explore the park as much as I would have liked but it looks like a great place to camp, hike, and be outdoorsy. Last but not least, we made it home for a beautiful evening at the ballpark! Go ICubs Go! 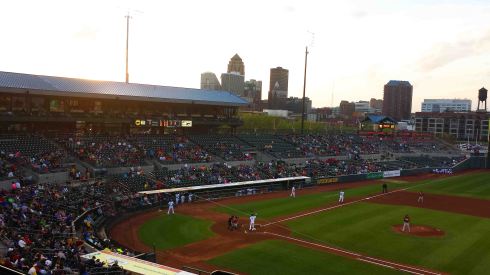 This concludes our first #Iowaventure (which will always be concluded with a photomontage).Expect more upcoming posts with insights on little known but interesting finds across Iowa and other places! Don’t want to miss any of these gripping adventures? Subscribe to my blog and you’ll receive a notification whenever I come up with another exciting post! 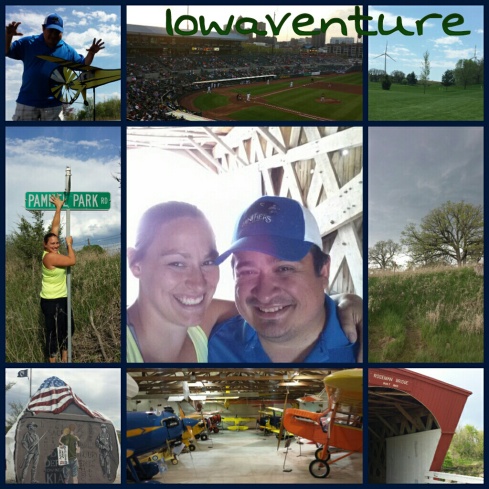