It is really dark in Maine.

There were about a gazillion options of what to do in Maine over this lovely Fourth of July weekend.  I opted to hang out with Elaine (my hostess) because she’s super fun and other than eating supper, drinking wine, watching Jeopardy and doing crosswords together we haven’t really gone out and done anything.  Saturday morning Elaine made entirely homemade blueberry muffins! This lady is going to make me fat.  At about noon we took an adventure to the two local wineries; Savage Oaks and Sweet Grass.  Sweet Grass doesn’t make grape wine they use entirely different fruits; peaches, blueberries, apples, cranberries etc. AND they make some spirits.  I tried the Backwater Gin…plain, and it ate my face off but tasted YUMMY. Also, I’ve been informed I can locate Pimm’s easily in Maine.  Fantastic.  For anybody who doesn’t know I have a not-so-secret love affair with Pimm’s No.1 and it is unavailable in Iowa.  I’ll be bringing some home. Savage Oaks also has some tasty choices but a little more on the traditional side. 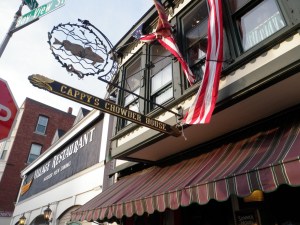 Now, Elaine hasn’t been to fireworks in well, she doesn’t remember how long.  So I says Elaine, we HAVE to go to fireworks!  Of course she complies because she’s always game for anything.  We decide on going to fireworks in Camden where they shoot them off over the harbor.  We read in the paper how they were doing some sort of underwater fireworks? We don’t know much about it and if they used them we couldn’t tell the difference.  Had some supper at Cappy’s Chowder House, wowzas!  Elaine had the most monstrous burger I’ve ever seen called the Mt. Battie Deluxe or something and I had the Belfast Special.  The Belfast Special was incredibly tasty.  Blackened Cajun chicken breast on a super yummy bun with pepper jack cheese, lettuce and habanera mayonnaise.  Enough spicy to make my nose run a little but not enough to void my taste buds for multiple days. Success.

The fireworks were amazing.  We sat in Harbor Park which is apparently the place to be and they shoot the fireworks off pretty far out in the harbor, right in between the island and little peninsular thing you see in the photo.  The only thing more beautiful than fireworks is to see them doubled in the water and bouncing around.  The show was at least a half hour long which is pretty long for most places and Elaine and I both enjoyed it, I think I have her hooked back into going to fireworks! 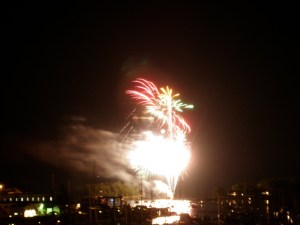 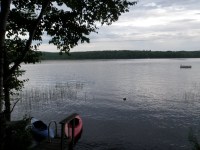 Today we had crepes for brunch and they were SUPER tasty.  We eat pretty well around here.  Elaine had a special crepe pan that looks like an upside down skillet with bow in the bottom.  Needless to say we couldn’t come up with the correct temperature to make it effective to use and settled for a more boring right side up skillet.  Elaine made a blueberry pie and we were off towards Palermo/Bald Head Island to have a cook-out with her a couple of her friends, Bernie and Donna,  who have a cottage on Sheepscott Pond.  Lots of normal summer fare for dinner, cheeseburger, potato salad, chips and garlic dip, corn on the cob! Bernie and I went kayaking out into the pond (again what I would consider a lake) and up the St. Georges River a ways.  It was a beautiful night at the perfect temperature.  Must be rough to be able to take three steps out of your cottage into a kayak in a beautiful lake.  For dessert there was Elaine’s magnificent blueberry pie and ice cream from John’s Ice Cream in Liberty.  John’s is another one of the MUST HAVE Maine foods I guess and it was worth it.  We had plain vanilla on the pie and some blackberries n’ cream on the side because it sounded delicious.

There was a lot of discussion over supper about how things are different in Iowa.  It’s surprising really.  One thing is that it is really dark in Maine.  People in Maine don’t believe in street lights, street signs or speed limit signs.  They prefer you don’t know where you’re going because they do know.  Well Maine is very dark (at least up here) and it makes it hard to see while doing anything at night. Weird. But, all in all a very relaxing and enjoyable 4th of July.