I find repatriation to be an extremely interesting topic. For anybody unfamiliar with the term (as it pertains to museums) it is essentially the returning of an artifact of particular cultural/historical significance to its originating country (typically from one institution to another). Most of the world’s best museums, even my own, are filled with artifacts from around the globe, not just from local resources.

NAGPRA – Describes the rights of native tribes and descendents with respect to the treatment, repatriation, and disposition of native human remains and cultural items.

The result, some museums began returning things on their own, others began demanding artifacts from their country be returned to them, even when some were lawfully obtained.

Let me start by saying, I get it. You want your stuff back, and why wouldn’t you? Chances are it was stolen or wrongfully obtained in the first place.

In the 1800s to early 1900s there was a lot of artifact mining in every country; America wasn’t the only one doing it. The archeological dig was prominent with amazing piles of artifacts and works of art being discovered all over every day. There was this rat race to get all the stuff, to be the biggest, the best, most diversified, with all the finest pieces of the history puzzle. The British Museum ended up with the Elgin marbles, the Penn with the Troy gold, Troy with what was (at the time) thought to be Alexandre’s sarcophagus from Lebanon. 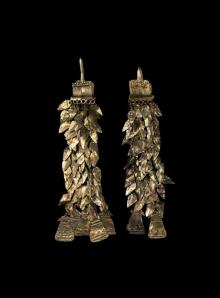 Photo of a piece of the Troy Gold from the Penn collections. http://www.penn.museum/collections/object/160936

So, in 1966 the University of Pennsylvania Museum of Archaeology and Anthropology purchases for $10,000 some gold jewelry/adornments thought to be from Troy. They tell Troy before they do it, but because the provenance of the artifacts wasn’t proven they weren’t interested in them (before UNESCO). After conserving them and further research, the Penn almost assuredly proves them to be from the Troy region, circa 2400 B.C. This is AFTER the UNESCO Convention takes place mind you. Surprisingly (not!) Troy decides they want their goods back. One big difference in this case, as opposed to most others, is that the items were not obtained illegally. They had actually even been offered to Troy. So, now we have a big legal/contract issue. In this case, naturally, the Getty refused to return them, but, for the sake of international relations, has put them on indefinite loan with Troy. Troy is, in fact, demanding the return of its antiquities from all over. However, when asked if they planned to return the not Alexandre’s sarcophagus back to Lebanon, it didn’t seem promising. As far as they are concerned, they obtained it when Lebanon was still part of the Ottoman Empire and so it will remain theirs. Interesting.

The Elgin Marbles are another, some might say, infamous example of a country wanting their stuff back when they just aren’t going to get it. The Elgin Marbles is the term given to a collection of stone features collected from Athens between 1801 and 1805 by Lord Elgin. These well-known pieces were purchased by the British Parliament in 1816 and are still on exhibit at the British Museum today. Honestly, if Elgin hadn’t rescued these pieces when he did, they likely would have been destroyed by Turkish soldiers using them for target practice, as well as a variety of other vandalism. I could talk about the marbles all day, not to mention how beautiful they are. Although older, a good article here. 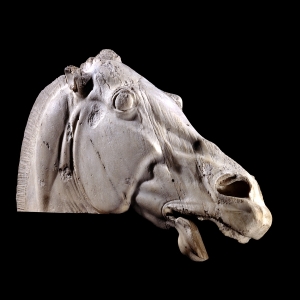 Elgin Marbles, Head of a Horse of Selene from the British Museum Collections. http://www.britishmuseum.org/explore/highlights/highlight_image.aspx?image=an18006.jpg&retpage=18108

I repeat, I understand, you want your stuff back but there is also something to be said for diversity in museums. Part of the allure, I think, of the British Museum was that while I was working there not only did I get to visit the UK, I also went to Greece, Egypt, other parts of Africa, back to America, China, and more. What if everybody demanded their artifacts back? Then, in my life, chances are I would never have gotten to see the Elgin marbles, the Rosetta stone, mummies, pieces from Pompeii, etc.

This will never happen, I realize, because aside from the ‘greatest’ items there is simply far too much stuff to go around. Believe me, I know. Who knew the citizens of Boone County would keep 29 typewriters and a plethora of merchandising yard sticks. Yardsticks for EVERYBODYYYY!

(I’m not criticizing; I actually LOVE the yardstick collection, just not the typewriters.)

I digress. Repatriation is important. We shouldn’t be digging up early native graves and keeping the stuff we find for our own morbid little displays.

Museums are morbid for the sake of learning.

It should ultimately A) stay in the ground undisturbed (okay, maybe after careful survey, study, and photographing without flash!) or B) be returned to the existing members of their culture and the decision left to them.

There will be a happy balance of repatriation of artifacts to keeping diversified collections (or between some countries maybe there won’t be).

How does this relate to you? I’ll tell you.

It’s kind of like when a great-relative decides to sell your grandmother’s blue popcorn bowl off on their garage sale. You find out her neighbor snatched it up for $3. That bowl was a part of your heritage. It tells a story, it’s paramount in the timeline of who you are. You want it back so you knock on the neighbor’s door prepared with your sob story about how close you were to your late grandmother and that the bowl holds precious memories from your fleeting childhood. They don’t buy it. Turns out they’ve been eating popcorn from it every single night with their greasy little fingers and they like it. So, you try another tactic. You paid $3 for the bowl, I’ll give you $50 (a price you are happy to pay to reinstate the object responsible for some of your happiest, most well-fed memories). This time it’s with sheer malice, they shake their head no and say, “I don’t think so. I’m sorry but I bought it and it’s mine.” – $100 – Nope.

You panic. Your past is in that bowl and now it’s going to be two miles away in a completely different neighborhood. The neighborhood where it was once used by smiling little cherub faces. How do you return that bowl to its homeland? Your hands, your heart, your stomach.

It could happen to you.

For more about the ongoing Troy Gold loan read here.