Woke up in fetal position this morning at Rodeway Inn, still quite disquieted by the place.  We left for Rockland which is the “large” town nearest where I’ll be staying this summer, pop. 7,300. First things first, we were due for an oil change then we went over to the Breakwater Lighthouse.  This lighthouse resides at the end of a 7/8 mile uneven terrain break water (meant to break up big waves coming into the harbor at hightide from the ocean).  The break water was constructed by the U.S. Coast Guard in the late 1800’s, it made for a good hike. 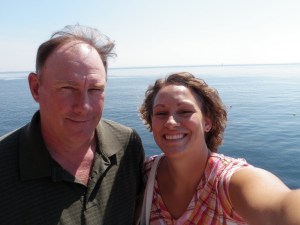 I think that I would like to be lighthouse keeper, as long as it was one where I could be secluded with no tourists. This one is a small but a neat little light house turned museum. So Dad got to experience his first good look at the Atlantic Ocean from the the top deck of the lighthouse!  It’s a terrible picture of
us but give us a break, we’re super tired AND the
it was quite breezy ocean side!

The picture on the right is the view from the lighthouse down the break water to the shore of Rockland.  After our morning exercise we ate at the Rockland Cafe which was a reasonably tasty little joint.  We putzed around Rockland for a bit and checked out an antique store or two, mentioned how much my brother Matt would love all of Route 1 from Brunswick to Rockland.  The whole strip of little town is lined with antique shops, flea market, and pawn shop type places.  Now, finally, on to our actual destination.  We made it to Union to Dave and Suzy’s house.  The Alden Place which is of one of the original founding families homesteads.  Their house is a Colonial/Federal mixed architecture style and is pretty neat, full of a lot of random antique stuff so lots to look at.  As part of my “assignment” before coming to Union I read the book Come Spring which is a novel about the first 10 years in the settling of Union based on the character Mima Robbins.  Like it’s really an assignment for me to read a book…
Anywho Dave took us on a driving tour around Union to show us the town but also the sites of where all the people in the book (and in real life) lived.  Very fun for me. We went over to meet Elaine who I’ll be staying with, saw her place and then went back to Dave and Suzy’s for supper.  Elaine and I will get on just fine I think, we both like food, cooking and have a strong love for wine.  We’ve all ready made a date to visit the two local wineries for tastings!  Next was supper.  Now I promised Dave I would try some coastal seafood so I tried both lobster and crab AGAIN and was not into it… Though Dad says as they were made into a type of cold crab/lobster salad it wasn’t like trying the real thing (by that he means drowned in butter).  We spent the next few hours chatting (mostly Dad and Dave talking about tractors) and now we’re all in our individual rooms as we need to leave at 6 a.m. tomorrow to take Dad to the airport in Portland.  I’ll make the transfer from Dave and Suzy’s tomorrow afternoon over to Elaine’s and then Monday I belive it’s off to work.  Work could be interesting, the historical society is very small but I’m really enjoying the people all ready!  Also, I like that Dave has all ready mentioned several fieldtrip opportunities to neighboring museums as well as on an adventure to attempt and find the original cellar hold of Joel and Mima Andrews homestead!  They were part of the original settling family who are the main characters of Come Spring.  This wouldn’t excite most people but I LOVE this stuff!

This entry was posted on Sunday, June 20th, 2010 at 3:31 am and posted in Schwartz Athenaeum. You can follow any responses to this entry through the RSS 2.0 feed.
« I Had Better Earlier Today
Not Home, but It’ll Do »

One response to “Arrival in Union”