Yesterday Suzy told me that Dave wanted to take us out for either lunch or dinner tomorrow (today/Thursday). Okay, whatever works for me. By going out for lunch, she meant leaving work at 12:30 for an all day field trip and getting home at 6. That’s my kind of lunch. Below, I’m patiently waiting in my “office” to go for lunch.
So we took a scenic drive to Pemaquid Point which is south of Union right on the ocean. Traveling with Dave and Suzy is a lot of fun because it’s like a constant history/factoid tour. Now, not everybody loves that sort of thing but I go CRAZY for it. I eat up every little fact I can get, everything is ultimately fascinating. They know a lot about old farmsteads, so I get lots of facts on the architecture of old barns.
We had lunch at a cozy little place called The Cupboard in Bristol. Everybody eats upstairs while the couple who own the place cook downstairs and send your food up the dumbwaiter. I had an open-faced, sliced sautéed pepper steak with swiss cheese sandwich. YUMMM! The cheese was so melty and rich. Yum. Apparently this place has the best sticky buns in the area but they run out early in the morning. Good thing Dave had called earlier this morning to tell them to reserve two bunches; one for he and Suzy and one for Elaine and I. We haven’t gotten into those yet because we had tasty fresh veggie stir fry for supper. I’m sure it will happen at breakfast. Nobody here lets me pay for anything, as Dave puts it “You’re not getting paid enough this summer, take it where you can get it.”
From there onto the Pemaquid Point Lighthouse, it’s absolutely gorgeous. It was the perfect day and time for it. Bright blue sky but the rain clouds were moving in making for a nice contrast. Another beautiful wide open ocean space and the rocks here are amazing. As you can see in the photos they are long uneven striations and ledges with pools moving out towards the ocean, which was at fairly high tide. There isn’t any way to explain the coast of Maine and the beauty it holds and photographs can’t start to compare, so mysterious. It’s the unknown ocean, the cool fresh breeze, the enormous boulders and sounds of the water crashing in around your feet. Just come see for yourself. 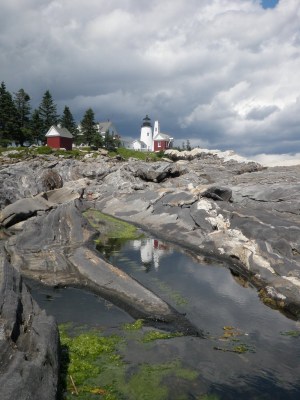 The lighthouse was also interesting, I love that you get to go upstairs and stand in the top of them. Notice this artsy shot with the reflection of the lighthouse in the pool. Oh yeah! I learned a little something new in the little “museum” they have inside. Blue lobsters! Bright blue lobsters! Who knew? I didn’t. Apparently the pigments in lobsters are made up of the primary colors; blue, yellow and red. Very rarely there is a genetic defect and you end up with a ROYAL blue lobster. Occasionally there are tiger striped ones and occasionally black or yellow. Neat.

Further along the coast was Fort William Henry which reminded me of a short fat version of the “castle” at Eagle Point in Clinton, IA.  The first fort, Fort Charles was erected on that location in 1677. 1677! So long ago, through the years other structures have been built until the latest reconstruction which was finished in about 1906.  It seems like almost everything in maine has a great view and Fort WH isn’t to be excluded.  It was pretty dreary out at this point so picture taking wasn’t at a premium.

We had ice cream at Round Top Ice Cream in Damariscotta and they had SO many flavors, maybe 40 or more. I ended up with some DELICIOUS stuff. I couldn’t decide between two flavors so Suzy says, “Get TWO scoops!” Nobody said they were going to be ginormous, I got a scoop of Butter Crunch (what I refer to as Butter Brickle) and a scoop of Coffee Toffee Crunch. Yum, but I had to enlist Dave and Suzy to help eat it.
Just a mile or so away we went to see the Whaleback Shell Midden. Super interesting. Apparently as long as 1,000 years ago Native American tribes would come to this area to have huge oysters feasts when they came into season. Eating the oysters and leaving the shells strewn about the ground which were, at one point, around 30 feet deep. They are crushed along the shore making white hills like you see in my picture. It’s really very interesting and if you want to read more you can here: http://en.wikipedia.org/wiki/Whaleback_Shell_Midden
I know wiki isn’t the best source but this is all the same stuff I read on the text panels today. 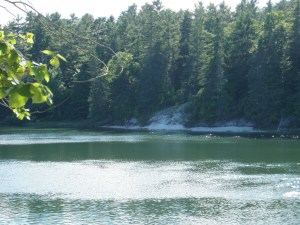 On the way home they stopped to show me the Hooskow.  They expected me to know what this is. I had never heard of such a thing.  I guess back in the day they would create large stone corrals and if there were any stray sheep/cows whatever they would stick them in the Hooskow (Who’s cow?) until their rightful owner came along frightfully worried about their well-being.  It used to be a joke that if somebody got out of line, people would say, “We’re gonna through you in the Hooskow.”  Similar to being thrown in a jail I guess. The things I never knew. After this we came on home. I had a great day, saw a lot of beautiful things, ate a lot of delicious stuff and arrived home safe and sound. But, I wish my family were closer.

This entry was posted on Friday, July 2nd, 2010 at 3:24 am and tagged with Maine, Whaleback Shell Midden and posted in Schwartz Athenaeum. You can follow any responses to this entry through the RSS 2.0 feed.
« A Dip at Pieri Pond
I ate a Wasses. »